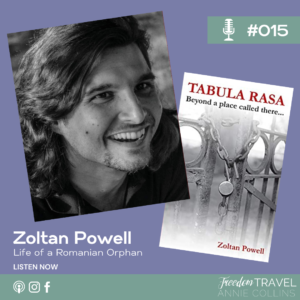 Meet Zoltan Powell, author of Tabula Rasa: Beyond a Place Called There… Listen and be inspired as Zoltan describes his upbringing in a Romanian Orphanage, followed by his struggles to success.

➡️Describing his life growing up in a Romanian orphanage, the history of why and how 500,000 children were abandoned.

➡️How he came to America, taught himself English, was adopted and then abandoned.

➡️His boarding school years where he went from a defiant kid to the Student Council President in just a matter of a few years.

Be sure to subscribe to be notified of future episodes! And, of course, I always appreciate your likes, comments, and Apple Podcast reviews.

If you know of someone who we should hear from on another episode, please let us know! ➡️ www.freedomtravelllc.com/podcast-guest-suggestions